In January or February of every year, I send out a newsletter to my clients and friends that recaps the prior year’s real estate market and statistics. Early in 2017, as you all know, we were all dealing with the tragedy and devastating losses of the Thomas Fire and the debris flow that severely impacted Montecito and Carpinteria, and affected everyone in this community in some way. Because of all this, I wasn’t able to send out my annual letter at the beginning of the year. I hope this mid-year update will provide helpful market information.

Amid all the craziness, I was scheduled to speak about the local market at the Santa Barbara Association of Realtors annual Economic Review and Forecast that was held February 15 at the Fess Parker Hotel. The event sold out, perhaps because people wanted to hear how real estate would be impacted this year by the fire and debris flow. I was honored to be invited back to speak at this event, and my presentation included an overview of the real estate market in 2017 and a comparison of the current stats to the last market peak.

Santa Barbara’s median home price peaked in 2005 at $1.25 million. And what was the median home price in 2017? It was exactly $1.25 million. We reached and matched the highest median price in Santa Barbara, and it took 12 years. In my February presentation, I noted how different areas of town peaked at different times during these 12 years, and compared today’s selling prices to the top of the market. For example, houses in the district of Santa Barbara (east and west of State Street) exceeded the peak in 2017 and were selling at 104% of that height, but houses in Carpinteria were selling at 82% of the peak. Median price for all houses in 2017 was up 8.7% from the prior year, and condo prices increased by 4.6% in 2017 from 2016. If you’d like to know more about 2017 and get a more detailed analysis of the 12 years since the peak of the last cycle, as well as information on distress sale statistics and a prediction for 2018, you can watch most of the presentation here on YouTube: https://tinyurl.com/Kalia2018Speech. I’m happy to send you info via email as well. 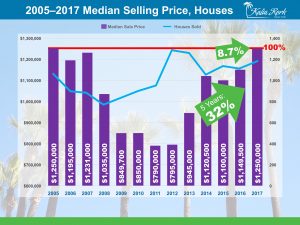 One more thing about 2017 before I delve into the first half of 2018: The median price in June 2017 was $1.25 million, and at the end of the year it was the same. That means that the entire 8.7% price increase came in the first 6 months of the year, and then prices stayed flat throughout the fall and winter months. That’s a recurring pattern in Santa Barbara: prices tend to rise at a sharper pace in the spring and summer, and then the rate of increase tapers off the second half of the year (in years with steady price increases). In my February talk, I predicted prices for houses and condos would rise by about 3% in 2018. Leslie Appleton-Young, the Chief Economist for the California Association of Realtors, also predicted 3% increase for our area.

In contrast to this pattern, however, the median price for houses is up just 0.6% in the first 6 months of 2018. Does this mean that we won’t have the forecasted 3% price increase this year? Condo median sales prices are up 2.1% for the first 6 months of the year but are up 7.5% since last June. Condo prices are rising at a steadier and crisper pace than houses, in part due to the number of new and luxury condos hitting the market. The median price statistic reflects not just appreciation but also the mix of homes sold. More sales of luxury condos, for example, will move median price up the scale. Fewer sales of luxury houses (Montecito, for example) will lower median price. Let’s look at some other statistics for 2018 year to date before wagering a guess on the balance of the year.

The market was very slow in January, of course, and also in the first half of February, and then it heated up rapidly. Mid-February though mid-April saw homes selling very quickly. I believe there was a backlog of demand from November through January, and those folks were actively buying and selling early this year. After April, the market slowed down to a more normal pace and continues there now. Homes that are priced well in the entry-level and mid price ranges (up to about $1.5 million) are selling quickly. I’ve found that properties that are even just 5%-10% over-priced are languishing on the market longer. The average time a home is on the market is about 54 days for January-June this year. It’s really important to price your home well, now more than ever, to get it sold. 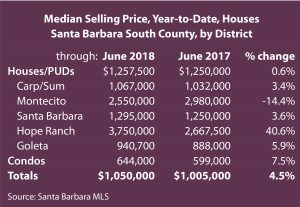 If we combine sales of all condos and houses in the Santa Barbara South Coast areas, the median price is up 4.5% this year from June of last year (see the table), and up 1.4% from the beginning of 2018. Regarding the number of sales, we have 5% fewer sales this year to date (through June) compared to last year through June. Not surprisingly, Montecito sales are down 30% compared to this time last year, and prices are down 14.4%. The other community most affected by the fires and debris flow is Carpinteria, and closed sales are down 10.4% from this time last year, but median price is up 3.4% year

over year. We expected sales to be down in these areas and prices to be impacted. My guess is this will be the case for a couple of years, especially in the most affected areas of Montecito. The community of Hope Ranch, not surprisingly, saw an increase of 37% in the number of sales (which is only 6 more sales, comparing 22 sales so far this year to 16 the first half of last year) and increasing prices. My Realtorcolleagues reported many of the people displaced by disaster bought homes in other local neighborhoods – including Hope Ranch, the Riviera, San Roque, Santa Ynez, and Goleta. It feels odd to quantify the impacts of these tragedies with prices and sales stats. These are just numbers and don’t tell the whole story of a community that was wounded and grieving, and who have come together beautifully to begin and continue the healing process. I have no doubt our town will recover, and I’m heartened by all those who have reached out to help.

I still predict an increase of 3% in median price overall, combining both houses and condos on the South Coast. The new luxury condo sales (Estancia on Upper State Street, the Tree Farm off Patterson, and more sales at the Village at Los Carneros) will help the condo median price rise, but fewer sales of houses at the top of the market will mitigate increases in median price. If you look at the bar chart above, you’ll see that there have been periods of several years where prices didn’t dramatically increase or decrease (prices were “flat”), and I will go out on a limb and predict we are entering such a period. We don’t’ have the economic conditions or subprime mortgages that contributed to the last down cycle, nor do we have crazy demand to buy. There is so much going on nationally and globally that could affect the economy and hence the real estate market, so I offer my forecast with that big qualification. Feel free to reach out anytime with questions on any segment of the market. 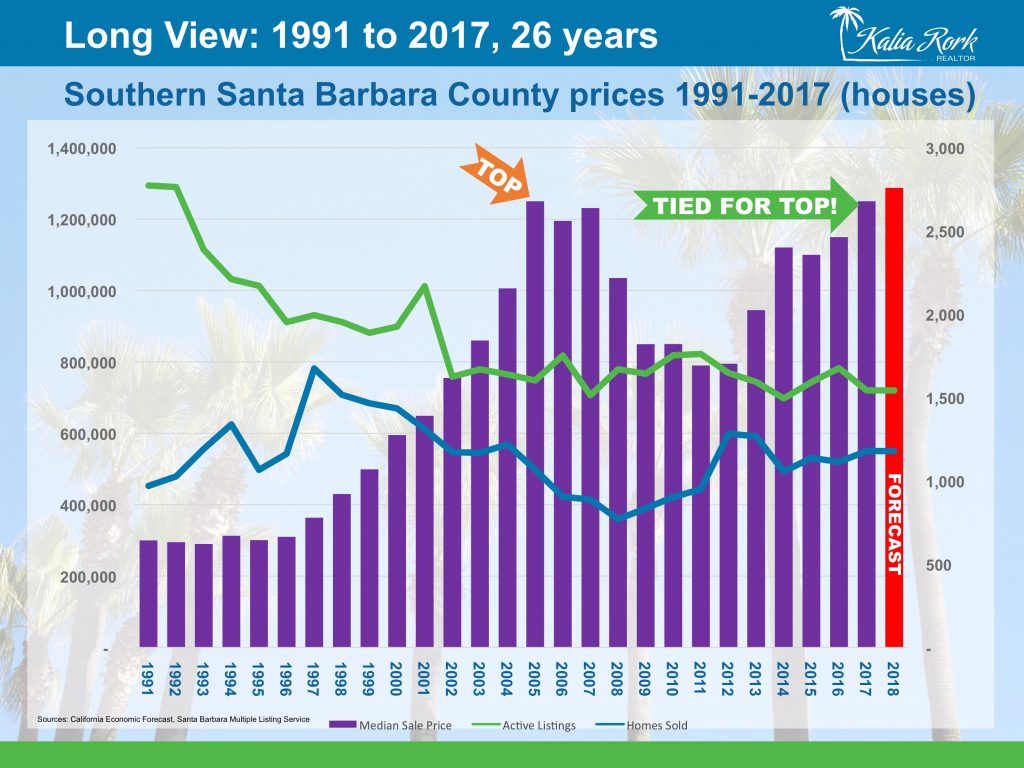 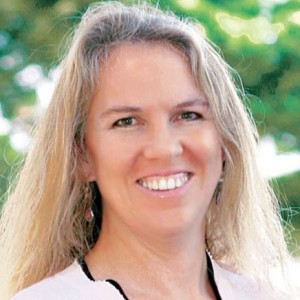